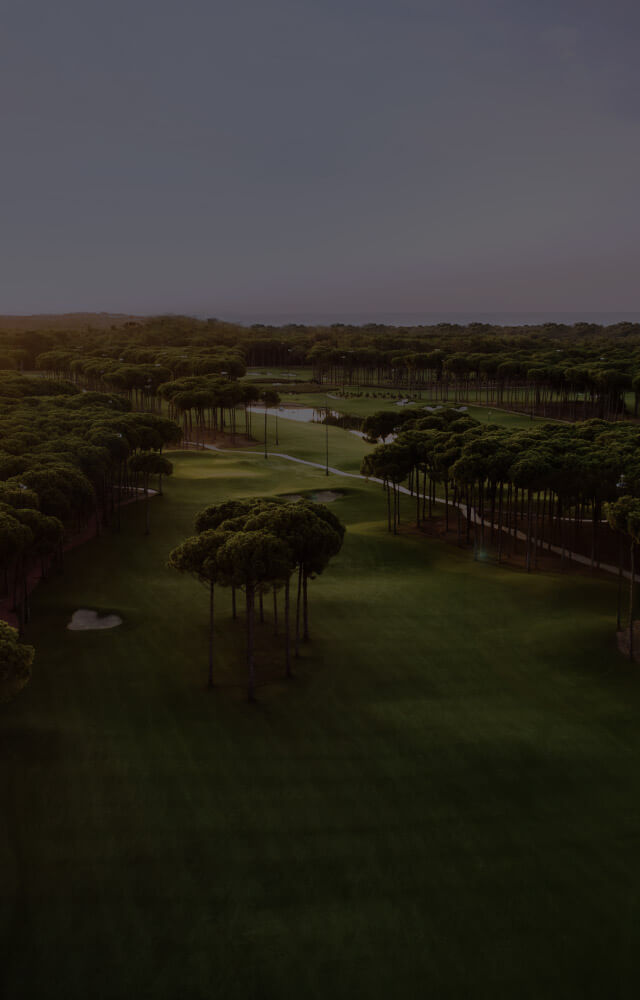 Book your holiday here for surprising and satisfactory benefits.

Let Us Call You

Please fill in the form.

Antalya is one of the world’s leading tourism destinations with its climate, sea and sun.

Antalya is one of the world’s leading tourism destinations with its climate, sea and sun. Antalya Belek is one of the most popular areas in this unique holiday region. As Regnum Carya, one of  Antalya Belek’s leading hotels where comfort and luxury is redefined, we would like to give you some suggestions for your holiday in Antalya.

As we mentioned, Antalya is one of most popular destinations in the world for summer holidays but there is more to Antalya than just a leisure holiday. The history background and beauties of the Belek region and Antalya are so magnificent that they astonish every person who visits this region. The ancient Aspendos Theater, Old Town ( Kaleiçi), the Ancient City of Perge, Hadrian's Gate, Düden Waterfall, Göynük Canyon, the Dim Stream and Karain Cave are just a few of many historical and natural beauties to visit and see in Antalya. You will be tempted to come back and experience the privileged world of Regnum Carya again.

Antalya Museum is one of the most important stops for those who wish to get to know the ancient Mediterranean civilizations. In this museum, the most important monuments of the Mediterranean region are exhibited. It would be a shame to leave Antalya without seeing the museum collection, which contains many valuable monuments such as the tired Hercules statue and the Sarcophagus of Heracles. This museum will give you a lot of information about ancient Anatolian and Mediterranean history, but you may also want to experience the history of this region. What kind of civilizations did people establish here, what kind of lifestyles did they have... If you wish to see these, many historical artifacts await you in the open-air museums.

Symbol of the city: Antalya Castle

The ancient city of Aspendos, close to the Serik district of Antalya, dates back to the 10th century B.C and  was founded by the Achaeans. Aspendos Theatre, which is the most well-known structure of this city, was built by the Romans in the 2nd century. This building, which was dedicated to the gods of the city and the Roman imperial family, is a giant amphitheatre with a capacity of 15,000 people. Among the other must-see historical structures of the ancient city are its walls, the agora, fountain, aqueducts, bath and stadium.

Make a magnificent entrance to the history of Antalya: Hadrian's Gate

This castle gate,  built in 130 BC on the walls surrounding Antalya, is also known as the "Three Gates". It was built in the name of the Roman Emperor Hadrian, prior to his visit to the city. With two columns and three arches, this work of art has the appearance of a typical Roman triumphal arch. Although the remains are no longer there, it is known that there were statues of family members of the Roman Empire on the door.

There are other places that make up the historical background of Antalya and characterise it as  an open-air museum. Historical Kaleiçi, Fluted Minaret, Historical Harbor, Temple of Apollo, Alanya Castle, Gelidonya Lighthouse, Phaselis, Perge, Xanthos, Termessos, Myra, Rhodiapolis and Olympos Ancient Cities are just a few of them.

This city is nature's gift to humanity.

One of the most important reasons as to why Antalya and its surroundings have attracted so much attention throughout history and why  many civilizations were established here is that it is a natural wonder. With its waterfalls, natural parks, caves and canyons, this place is literally a paradise on earth for nature lovers.

This waterfall, which is the most popular natural wonder of Antalya, has  rich vegetation and many tree species. Due to these features, it is a frequent destination not only for tourists but also for migratory birds that add beauty to this place. The waters of the 93-km-long Manavgat River flow from the 4-meter-high cliffs at this very point, creating a unique natural landscape. In this region, fascinating all visitors, there are restaurants, terraces and many other facilities to enjoy the view.

The centre of tranquillity, peace and natural beauty: Göynük Canyon

Göynük Canyon is one of the quietest corners of Antalya’s natural paradises. It is a centre of attraction for tourists with its ponds, caves, suspension bridges and walking paths. Its unique flora wins the admiration of everyone who sees this place.

The whole region gets its name from Kekova Island, which was used for shipbuilding in ancient times. The island, which has been an important centre since ancient times and home to many civilizations, has never been a settlement centre but has always been a centre of attention with its magnificent nature. The ancient city, dating from the Hellenistic and Roman periods, surrounded by natural beauty, turned into a sunken city after earthquakes throughout the years. Kekova Island and its surroundings, which remains a centre of attraction with its crystal clear blue  Mediterranean Sea and its historical structure, is one of the places that must be seen in Antalya.

There are countless natural beauties in Antalya

Of course, the natural beauties in and around Antalya are not limited to waterfalls, canyons and historical places. Karain Cave, dating back to the Paleolithic ages and the home of many civilizations , rafting at Köprülü Canyon National Park, İncekum Nature Park, where lush forests meet with the deep blue sea, Çıralı Yanartaş ( Chimera), witnessing one of the most interesting natural occurrences where flames have not extinguished for thousands of years, are just a few of the many natural wonders to see in Antalya.

Regnum Carya is an ideal facility to spend your summer vacation. If you wish to further enhance your  wonderful holiday by visiting historical and natural sites, we suggest that you consider our recommendations for Antalya. Experience an unforgettable holiday with  Regnum Carya privileges in Antalya, the top destination for the best holidays.

We use cookies on our website to better serve you. By clicking the "I Accept" button, as Regnum Carya Hotel, you accept the use of cookies for the purposes of making our website compatible with the user, improving the performance of the website, analyzing user behaviuor provided that no data directly identifies you and for offering personalized advertising activities. You can find detailed information about cookies in our Cookie Policy . You can always manage your preferences in the "Manage Cookies" section.

Preference cookies, also known as functionality cookies, are those that allow the website to remember your past preferences such as the language used or the region preferred or the user name and password providing automatic login.